Industrial revolution: Canals and Railways added to link centres of cities to each other 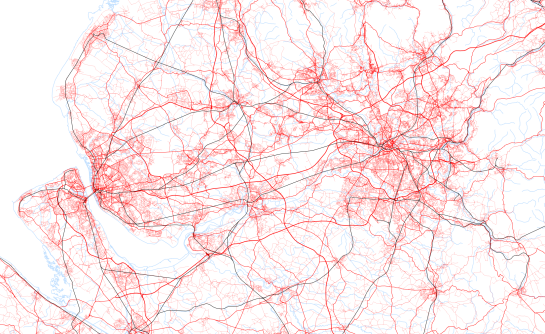 Cities work because they are connected across many scales simultaneously. They allow people to live at the edge but easily get to the centre, and once in the centre they create opportunities for interaction. Stronger cities are better linked to their surrounding region, allow easier access to the centre, and create better circulation patterns once there.

These properties can all be measured by analysing the spatial network. This piece does not create a rigorous quantitative analysis, but instead turns on layers of infrastructure (very approximately) chronologically, to generate some initial thoughts as to how the last hundred years has changed the way cities work and how they relate to each other.

The spatial network is formed by the streets, roads and railways that allow people to move by various modes of transport. Up to the 20th century, canals and railways allowed the large scale (canals), fast (railways), movement of goods and people from the centre of one city to the centre of another.

Because railways required people to walk to and from a station at each end, they (initially) needed to be in the centre of cities.

As car ownership increased it no longer became necessary to be physically close. Constant high speed movement was possible, and this was rightly seen as being unsuitable in city centres. In contrast to railways, motorways therefore avoid passing directly through city centres. While they may pass around them, often at a different level, the engineering solutions mean they tend to cut through other parts of the city that work at a slower speed and smaller scale. This creates severance within the city, and reduces the effectiveness of one of the fundamental things a city has done for hundreds of years (allowing a resident population to access the centre).

Outside cities, where junctions occur in other infrastructure networks, these are often opportunities for smaller towns and villages, which benefit from being connected to a network of larger cities. The motorway network passes between these areas, and because it prioritises speed (which impacts on stopping distances and the dimensions between junctions), it doesn’t allow potentials for new development. Because it doesn’t actually reach the centres of cities, journies on and off this network are extended which requires higher energy use and also creates congestion.

What this shows is not that we shouldn’t move large distances at high speed, or individually, but that the networks this movement occurs on need to be designed more intelligently. They need to understand fundamentally what cities do, and respond to multiple-scale conditions – either by slowing down, allowing more connections on or off, or maintaining existing smaller scale spatial networks.

There may be higher costs associated with burying or elevating infrastructure, but over time this will create more benefits to the city in terms of the city economy, environment and health of inhabitants.

Unfortunately because these timescale are longer than political terms it means these decisions are often avoided. The magic bullet of technology (access to education, working from home, smart cities, self-driving cars) may reduce the need for travel, or better manage existing networks, but because people are physical, and cities are physical objects, these solutions cannot overcome the damage done to cities, and networks of cities, made by motorway building.