The last 100 years is littered with example of ambitious city projects that have not worked as intended. Why do so few new cities work the way they were meant to? How can we learn from these and avoid falling in to similar traps? What do we know now that could make any difference?

Here are some examples to provoke thinking:

New towns were at the cutting edge of the UK’s planning and design thinking, providing an option to accommodate large numbers of people requiring rehousing after the second world war, to move people in to modern housing with suitable levels of utilities, and to live in healthier places.

The model for the new town is an evolution of the Garden City, where green space is always nearby, and people do not live next to places of potentially polluting employment.

This is one of the most best known UK new towns. It is a classic New Town which embodies many of the characteristics of urbanisation still visible in the developments taking place in rapidly growing cities: separate movement networks separated by undefined green spaces, single use zones, low density housing in discrete clusters (which could be gated or not), and an internalised town centre.

This also has a very specific architectural language which uses brutalism to become a complex super scale, machine-like building.

This is what Cumbernauld looks like today compared to the vision.

Skelmersdale was designated a new town in 1961, from the 1970s industrial employers left town and were followed by increases in crime, drug problems and poverty. These were external economic shocks to an urban system, but in the case of Skelmersdale they have been made worse by putting people in segregated and isolated places, where connections both within the town and to the wider network of neighbouring towns and cities is poor.

The street network is decribed as a roundabout system. This essentially prioritises the speed of private cars over everything else. Pedestrians have to use subways, bridges and hidden paths. This is the opposite of agile or adaptable infrastructure, it is not flexible and can only be used to carry out a single role. It is also the opposite to the cities that have sustained themselves successfully for long periods of time.

Many of the New Towns today are social and economic failures.

In a similar vein to New Town are Eco Cities. It’s maybe unfair to talk about these cities as failures as many haven’t yet been completed – however part way through the design development, proposals have changed a huge amount from the initial vision/concept.

One reason that these may be considered unsuccessful is that the difference between how they have been delivered in comparison to the images used to publicise them around a decade ago is so great.

To become carbon neutral some proposals went to extreme lengths to prevent cars accessing the site, instead relying on new technologies. Streets were deliberately narrow to provide shade for pedestrians, and in some cases so narrow that cars couldn’t drive through them if they wanted to. In some cases streets became discontinuous in order to help local air movement, but creating very complex, almost illegible, spatial networks.

Over-relying on one technology had impacts on the overall design, where it became so specialised that any agility of infrastructure was lost. It was designed in a way to optimise the design of a system, rather than on the basis of what made a city intelligible to people. It also failed to predict relatively short-term but disruptive developments such as clean self-driving cars.

As a result they became more like huge buildings than cities – a highly specialised, complex design where individual systems integrated with, but were heavily reliant on each other.

Often, the scale of proposal is very large if considered as a single development, but not large enough to become a self-sustaining city. The amount of land required for these developments often means they are on the edges of cities in the least connected places, meaning that the amount of travel required to and from work increases, and it is difficult to develop the critical mass required to become a place in their own right.

Typically these are a Chinese urban phenomenon, where complete cities are built but remain uninhabited a number of years after completion. There are a combination of reasons why this happens, including location, investment model and financing etc. Often they have design characteristics that test European notions of authenticity – such as a Bavarian themed shopping street in the centre of a complex of towers.

However, Ordos is very interesting for other reasons. Zoom out in Google and it’s possible to see that while the planned city might not have anyone living there, there is an unplanned settlement that grew next to it to house the workers who built the city – or there was until it was demolished and replaced with an extension to Ordos around 2010.

This is particularly interesting because it grew by itself while the planned City struggled.

In this case the unplanned settlements are in Jeddah. This city is the embodiment of Motopia where massive roads connect internalised single use shopping malls and there is even a 20 story apartment blocks with spiral ramps providing car access to every floor.

Unplanned settlements are one of the defining characteristics of the city. There are over 50 of them ranging in population from 6,000 to 120,000 residents. There are a range of different types, including urban villages, squatter settlements and pirate sub-divisions that have grown increasingly dense as the city has grown.

Many of them degenerated to their current condition as a result of a large scale highway network that connects people across the city at high speed, but which makes it impossible to cross the road. Because these areas have an unclear legal status and poor access to utilities, all of them are classified as slums. However, they are also the most sustainable parts of the city being walkable, affordable, high density but low rise, and mixed use in fairly central locations. 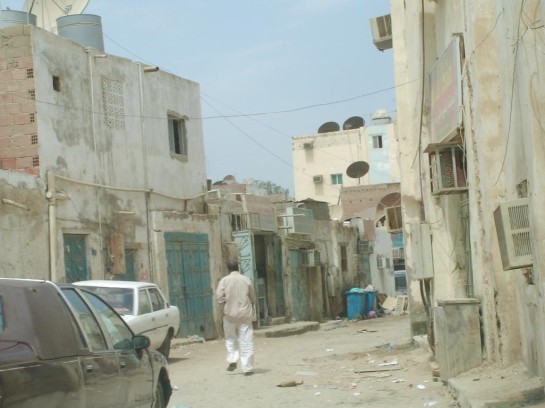 Why does this happen?

One set of these examples represent what was the most advanced thinking on cities and design at the time when they were conceived, while the other grew by itself without control. And whilst the informal settlements are technically classified as slums, from an urban point they have many positive characteristics.

So why do the parts of cities that emerge themselves work better than the cities that are planned? There are of course many sides to this. Without going into detailed spatial analysis of the designs this discussion outlines some initial thoughts.

What this means is that each urban system becomes refined as an end to itself – as in the Jeddah example, a motorway makes it possible to drive across the city at 70mph, but it makes it impossible to cross the road to buy some milk. In turn this makes it difficult to integrate with other systems, which has negative outcomes for people. Often the first time that all urban systems are actually combined is when the city is actually built.

The results of this approach can be seen around the world – massive highways, low density suburban sprawl, super dense city centres. The problems of the silo are not new; when Cerda was planning the extension of Barcelona in the 19th Century there are records of him complaining of equally inflexible siloes.

As noted in the descriptions of the New and Eco Towns, these were designed as complicated and inter-locking pieces of very specific infrastructure. While this avoids creating segregated urban systems, they result in a similar problem through the exact opposite approach: the systems are inflexible because they are so closley inter linked with each other. Both approaches place the persuit of a technical solution over that of how an inhabitant would use the city.

Typically these proposals were developed in response to a very narrow economic scenario and planned to be built over a relatively short time in a few phases. As these wider economic conditions changed, the designs have been found to be very difficult to adapt, making delivery of the original vision almost impossible.

The approach to design is closer to the design of a very large building, where a fixed set of variables and requirements are known at the beginning and which don’t change significantly during construction. Furthermore, this approach to design tends not to be analytic in its understanding of what makes successful cities work.

The counter argument that planned growth can work is shown by cities such as Barcelona. Today Barcelona is mixed use, high density, and walkable.

Barcelona is interesting because the key element of the plan is the grid of streets itself. Not only is it something that works to create blocks which are adaptable & flexible to traffic and to development, but which cleverly tie together historic settlements within the hierarchy of the grid. By doing this it integrates the new and old settlements of the Bari Gothic and Gracia, so that the Ramblas has remained one of Barcelona’s key spaces.

This example is also interesting because the outcome of development was unintended. Initially urban blocks were meant to maintain two open sides. However, because a huge amount of research was done into how the street network could accommodate traffic, the city has been able to accommodate growth over a number of years.

Barcelona shows that a simple design outcome – a grid of streets and a block definition – provides a simple but robust enough framework to accommodate a more organic type of development that is more adaptable and responsive to the wider context.

There are successful examples of this approach (typically in other 19th century examples such as Manhatten), but the approach also appears to be applied to prevent rapid urbanisation leading to the formation of slums in some South American cities such as Trujillo.

How can we respond as designers?

The summary to this is that rather than designing cities as big buildings, to be delivered in a very short time, what is more likely to succeed is designing the conditions that can create and accommodate urban growth over time.

This isn’t as simple as just setting out a grid and waiting for it to fill in. The properties of the grid will create hierarchies, this will affect values and opportunities, and this will create pressures for particular uses or densities. The way public and private spaces interface are key to the urban characteristics that develop within cities, and some of the components that contribute to this need boundaries defined.

There are complex relationships between economic, financial, legal and spatial contexts, and the impacts of each on the other need to be considered. While the outcome of a framework may look simple, there is a deceptive amount of work required to develop and refine it.